It has been a long time coming, but what has been termed the Google Mobile Apocalyse or Googlegeddon or Mobilegeddon has finally arrived.

Here's the official announcement from Google:

“Starting April 21, we will be expanding our use of mobile-friendliness as a ranking signal. This change will affect mobile searches in all languages worldwide and will have a significant impact in our search results.”

But if you aren't prepared for Googlegeddon, you certainly aren't alone. Some of the world's largest organisations haven't yet made the leap to responsive websites, and they are about to pay the price. The official website for the British Royal family, David Beckham's official site, the official site for the European Union, Nintendo, Next, Kelloggs, Dyson, Danone, Versace ... there are all sites that, according to Google's own test, are not up to the mobile-friendly mark. 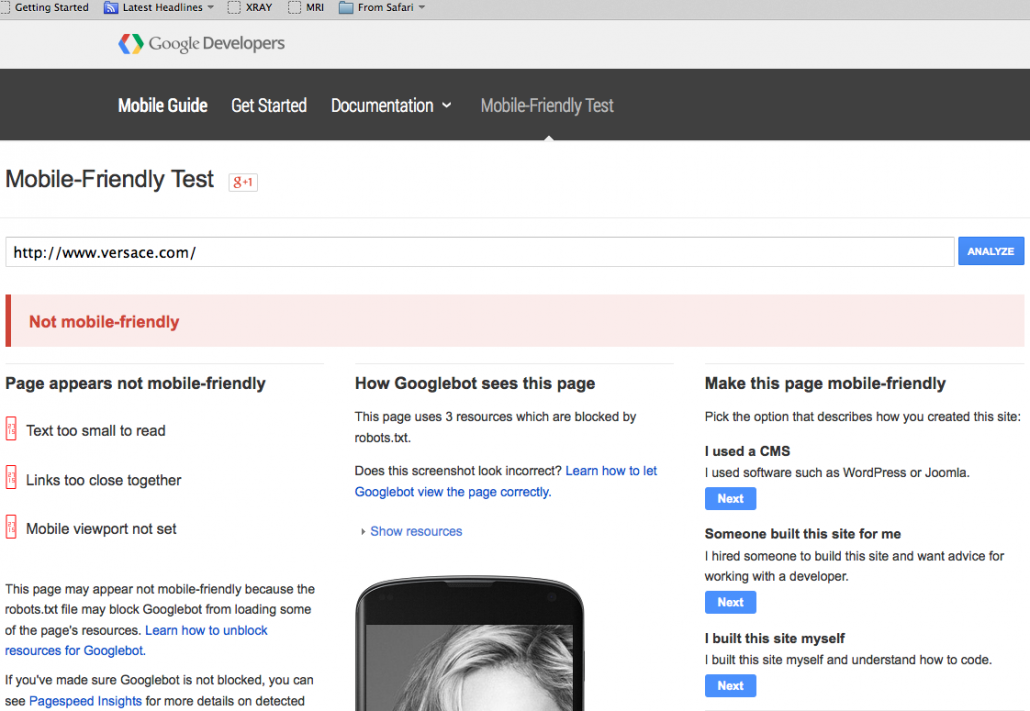 They can't say that they weren't forewarned. While the specifics of Google's page ranking algorithm are hush hush, Google has never made any secret of its favouring those sites that result in a better user experience.

And, given that 60% of all web searches are now via a mobile device  (that's right, phones and tablets have overtaken desktops as the primary search device) then it follows that mobile-friendliness would increasingly factor in Google's page rank prioritization.

It won't work: the Googlebots are coming and they will find you.

While you should be concerned about your page ranking in the wake of Googlegeddon, bear in mind that it only affects searches on mobile devices. To this point, Google's search results and page rankings have been more-or-less the same regardless of whether you googled using a desktop computer or mobile device.

Henceforth, however, page rank and search results will be tailored to the device being used: if your customers or prospects are googling using a phone or tablet, they will get search results favouring sites that are mobile-friendly.

That's just to give you the full story, not to try to soften the impact. As stated earlier, mobiles have overtaken desktop computers as the primary search device, so if your website is not responsive, you're doing yourself and your business a huge disservice.

Who will be affected?

In short, everyone. Executives from Google's Webmaster Tools team admit that Mobilegeddon is likely to have a much larger impact than both Panda or Penguin, two of the largest and most impactful search algorithm updates Google has ever launched.

But if your business is one that is specifically searched for when people are on the move — that is, when they're most likely to be using a mobile device — than your business in particular is in for a shakedown.

What kind of businesses might that include? Restaurants, takeaways, hotels and motels, travel sites, service stations, health care, any business that relies, even partly, on passing or tourist trade, among many, many others.

Don't be fooled by by what constitutes 'responsive'

A mobile-friendly or responsive website has specific attributes. We have had a few clients that mistakenly believe that they're site is 'responsive' simply because it can (kinda) be viewed when their phone is turned sideways.

Sorry, but that's not responsive. In that scenario, all page elements simply shrink to fit the whole desktop site into the mobile screen (or view port). Essentially, it's just a really small version and as such text becomes unreadably small and menus and links are so small they become inaccessible. Even if the text is readable, and the menu system navigable, this is more luck than structured and deliberate responsiveness, and Google will not see it as mobile-friendly.

A responsive site re-configures the site to make your website more easily accessible. Typically, at the very least, the menu system should change to what has come to be called a navigation 'burger': the menu items are stacked one beneath the other, minimised into a small 'burger' icon at top of screen.

To get your site ready for Googlegeddon, you have two choices: ensure that your primary website is responsive, or build a separate, mobile-friendly site accessible from, say, a subdomain like mobile.yourdomain.com.au. Either is acceptable, and both ensure you get your share of mobile search traffic. In the latter case, you’ll need a redirect that points mobile traffic to your mobile site.

If you already have a responsive or mobile-focused site, go through every page and make sure that is displays properly on mobile devices — just because your home page is mobile-friendly doesn’t mean the rest of your site is. Further, make sure Google’s bots can crawl your mobile site. If they can’t, it may as well not exist. Check your Google Webmaster Tools account for hints on checking the mobile-ness of your site.

Have a quick look at your competitor’s sites. Are their websites responsive? If not — and there is a staggering number of small business websites that are not responsive — then there is a golden opportunity to get the jump on your competitors by beating them to the mobile-friendly tree.

This will establish your business in the mobile search results page before you competitors get a chance to catch up.

Ready to go responsive? Talk to us first.

If your site is not responsive, and it needs to be, get in touch with the team at saso.creative to discuss your options.
We can test and assess the responsiveness of your current site, and advise of the correct strategy to ensure you come out the other side of Googlegeddon unscathed and ready for business.
Don’t let your hard-earned and established page rankings slip — not being mobile-friendly could be a real blow to your business.

Thanks for your enquiry! We’ll be in touch soon.

Is your logo a lightbulb moment?

Beyond blah, blah, blah: writing content that gets read

The Power of Words

Why SEO ‘Guarantees’ Aren’t Worth **it